News From the Forge! 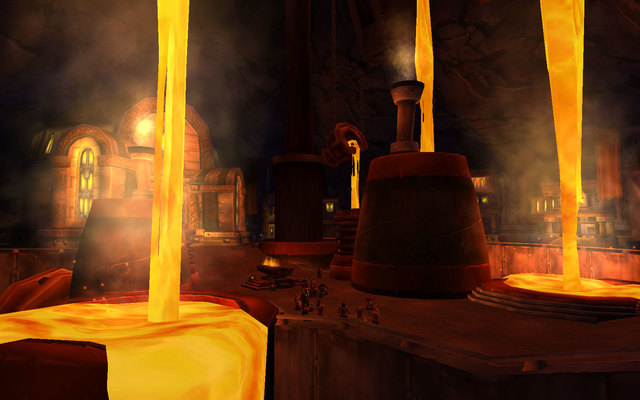 "Kinsmen! I understand that the recent shift has left many of ye graspin' fer a shred of understandin'. I know how ye all feel an I am speakin' to ease yer minds. With the downfall of the Burnin' Legion we now have a time of breathin'. With the end of such a mighty war many Kinsmen are likely to retire from the killin'-fields of war.

An' that is exactly what happened.

A number of our Kinfolk have respectfully retired to form our newest ally, the Battlestein Company. A peaceful Brew-Craft group that is highly focused on economics, social standin', an the assistance of helpin' rebuild Khaz Modan through good business. All very noble goals indeed! An needless to say we'll support 'em the whole way. But, we also have our own goals to not only continue but return to.

The fire in our hearts still burns hot as the Great Forge, an the blood boils in our veins as we charge! The actions of the Horde in the Second War is somethin' that many of us jus' can not forget about or forgive. So we will continue to stand ready in Khaz Modans defense. Continuin' to fight the never endin' battle upon our border-lands to secure safety an keep the Great Forge forever out'a enemy hands. These are the oaths taken by the Clan Steelgrasp an any who follow the namesake into battle.

With recent activities from the Horde, it looks like this is not far off.

The drums of war will sound again, the forges fires will burn molten fury to lead way to the clash of steel upon steel. The ring of it, is the song of our victory to come."

[What this means OOCly!]

As of late our guild has grown, massive and had a few different ideas of which we all wish to expand upon. So we've formed a duo-guild brotherhood of sorts.


It will setup to where the best interests of one guild will reflect upon the other, and vise versa. Granted with this there are going to be some slight changes; but not much at all. The main change is just the shift in leadership and a slight adjustment to how a few of the events are going to be done.

The slight adjustments will be for simplification purposes to make things easier to get through. Such as...

Though, do not fret about the ongoing activity of the guild and our story-line. Much of this will still remain the same as before and we'll just be moving onward with it. Such as...


I understand this is a lot to take in, but I ask of patients and understanding from folks while we prepare for the new expansion to come. I also apologies for this news taking a few days but thoughts needed to be gathered on the situation to most accurately report upon it.