The Battle in Vol'dun, Victory for the Clan! 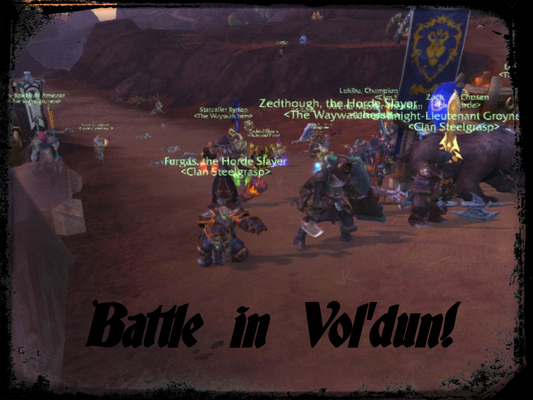 "Kinsmen of Steel, on August the 30'th we have obtained a major victory against the Warscar Reach when they tried to stop one of our minin' operations in Vol'dun up by the Temple of Akunda; a location very rich in monelite ore which we need for our Clan's explosives.

We have obtained this victory with the help of Knight-Commander Zack and the great folks of the Liongarde! This was arranged due to a missive sent out ta' Grand Marshal Raseri, an he in turn arrangin' for the reinforcements from the Alliance to lend aid to the cause. After all Kinsmen, a united Alliance is a strong Alliance an we all must stand together in this. This means...

When one of the Dwarves minin' operations or fortresses is in need, the Alliance gives aid. An so on, if our allies need assistance we Dwarves of Clan Steelgrasp are to lend such assistance, as we too are Alliance.

This is only one battle of many though, and the Warscar Reach is far from done opposin' us. Wherever we should seek to obtain ore from our world, we can also expect to see them across the way standin' between us an our goal.

But with every victory, we will only grow stronger as the ore obtained an items plundered will go on to in turn fuel the war efforts of our Kin an our Allies.

Our raids upon the enemy lands, have only jus' begun.

The event was quite fierce, though did have a few rules to it that were followed perfectly. ^_^ Which I thank everybody present for such.


The rounds worked as so...


In which the winning side can chase off the losing side, or stay and hold the area. Up to them. Either way at this point we have a winning and losing side and a final conclusion to the one event.

The RPPvP events are to also be planned between each GM of each guild involved at some point in time and even some of the Officers of the guilds if they so wish to attend the planning committee.

This is only one of many events to come! Keep an eye out for more in the near future.
0 Likes
Share